Doggone Dogs: On Acquiring a Dog in Mexico. (Easier than one may think)

"Is there a dead dog over there?" I asked Lisa.  Her lovely home in Jalisco, Mexico has a lot of space including a large covered patio which currently was the (final?) resting place of a strange dog.

Lisa's reply was one of curious scepticism, until she looked over and saw what indeed looked to be a dog on it's side, two of its short legs elevated in the air.  There's certainly no shortage of stray dogs around here but the property is entirely fenced off and it's rare that any would find their way inside.  Perhaps a dying dog would be tempted however, to find a quiet place away from the busy road to die in peace.

We went over to investigate.  The dead dog experience a remarkable recovery and ran away.  I say ran, but really it was more of a waddle.  This dog wasn't dead, but she was pregnant, and evidently had been for a while.  Luckily she ran off.

Lisa and Luis have a dog already, a cute little Cocker Spaniel Puppy.  They got it by mistake.   Their friend and landlord was talking with Lisa about dogs.  He was saying how they'd like a dog but didn't have the space at their personal house, "but look at all this space here!  This property would be perfect for a dog!"  What's more, he knew of a dog who just had puppies.  Lisa agreed and said it would be great to have a dog here, thinking that the landlord wanted to have a dog but keep it at the rental house.  A simple translation problem lead to the confusion.

The miscommunication was later sorted out.  Lisa agreed with Luis that they definitely didn't want a dog of their own.  They decided that they needed to call their friend to let him know about the "change of heart".  The phone call was postponed during the craziness of Christmas time.  Shortly afterwards however, they were saved the trouble of making the call themselves.  Their friend called to let them know he had their dog for them.  It had been in their house for a week now and could they please come and pick her up.  They decided to name her Galleta, Spanish for "cookie". 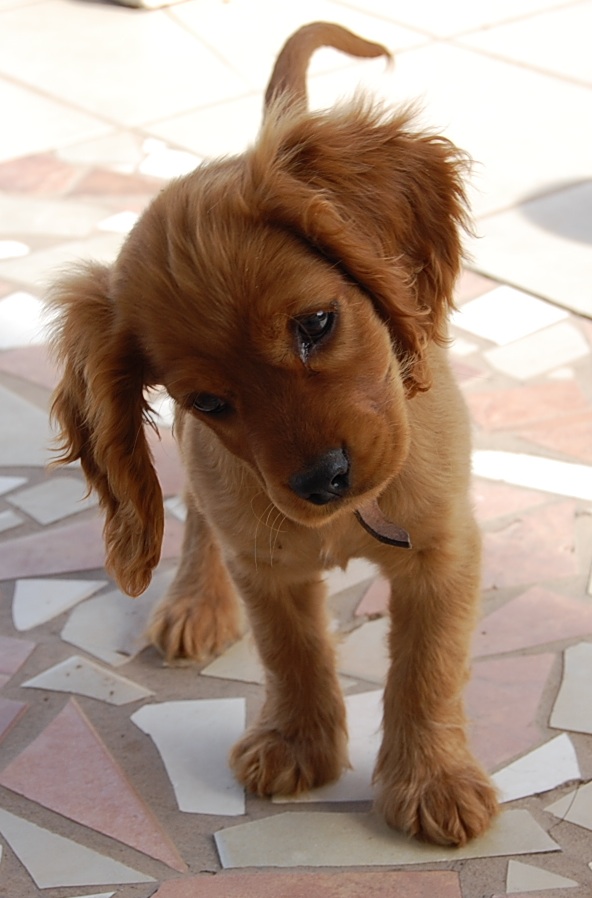 In the evenings I've enjoyed sitting on the patio reading.  The nights are warm and the stars are bright.  It would be incredibly relaxing except for the fact that Galleta likes to play then.  Playing involves biting at my toes, hands and, if all this fails to get a reaction, my face.  I've been thinking that I would like a dog for some time now so generally I can be tempted to leave my book to chase her around the yard in the soft glow of the patio light.  Two nights in a row I saw a small creature slip off into the night when Galleta and I play in the dark.

A day or two later Lisa and I saw this same pregnant dog hovering around the edge of the property.  I brought a small bowl of food to her and tried to tempt her off the property.  I wanted to feed her but didn't want to encourage her to associate the house with food.  Evidently hungry, she followed closely for a ways and then stopped and went back.  She was in the same area that I saw her the night before, by some assorted detritus leaning against the fence, and I speculated to Lisa that she had her puppies there.  I left the bowl near her and she ate it.

Yesterday we were enjoying Easter lunch when we spotted her.  We explained to friends Juan and Cynthia about her.  Juan later went to the area to look for evidence of a litter  He came back and said that indeed there was a puppy there, but it had died.  She continued to hang around.

This morning, while Lisa was out, I was changing Santiago's diaper, simultaneously trying to clean him up, keep his feet out of the dirty diaper and the Cocker Spaniel puppy from taking the used wipe for a toy, when I spotted movement in my peripheral vision.  It was the little stray puppy who had braved the trip to come up to the house and peek inside.  I finished changing the diaper and rushed outside to chase the dog away.  Can't turn the house into a shelter for all the strays, that's for sure.

I ran out shouting and looking as threatening as possible.  The dog rolled onto her back, looking up submissively, her swollen teats all too evident.  I'm the kid who cried when Bambi's mother died.  I didn't not grow up into the sort of man who can hit a dog who's lying on her back looking up at me like one who expects nothing else.  I poked her with the end of a broom, a trick I learned from little old women in the cartoons.  I went into the house.

Lisa came home and I explained what had happened.  We saw the dog later on.  I barbequed chicken for lunch.  The chickens here are sold with organs and feet included.  I grilled them up and fed them to the dog.  Lisa suggested that since there's almost certainly contact between the stray and Galleta we should throw some flea powder on her.  I agreed.  The instructions said that the powder must be rubbed in so that it gets to the skin.  I followed the instructions.  I can't blame the dog if she felt that she was being petted in an affectionate manner.

I have found myself petting her absentmindedly while sitting reading a book.  I wonder if I'll soon have a fuller understanding of the idiom "lie down with the dogs, get up with the fleas."  Lisa looked at her and proposed that we could name her even if we didn't have intentions of keeping her.  I agreed.  We sat on the patio chairs and looked at her trying to think of a good name.  "Mango!" Lisa submitted.  Instantly I knew that it was a great name.  "Mango Unchained!" I said.  She is, after all, a stray. wychykibwp
Hi. I'm Ed. Maybe if I spend a bunch of time writing a great profile description about myself I'll be motivated to write more because if I never post, nobody will ever come to my blog to read this. Probably it's all a waste of time anyway. I think both of my readers know me already. When you leave comments on my blog it makes my week.