I just heard on the radio that a new pope has been elected.  As of yet, exactly who has been elected isn't known.  The smoke signals only tell us so much.  I heard that there's a decent possibility that a Canadian cardinal, Marc Ouellet will be the first North American to receive the honour.  The patriotic part of me hopes for this, but on the other hand he's conservative by Catholic Cardinal standards which is quite a few shades too conservative for me.

I understand that it's possible to bet on papal elections.  I'm not one to gamble; I hate losing money far too much but I think that if I were to bet on anything, it would be this.  For one thing, part of the fun would come from the fact that the opportunity comes so intermittently.  For another thing, historically it's been quite difficult to anticipate who will be chosen.  This means, I would think, that there's a better chance of getting a good payout by supporting a dark horse.  I would think that the odds are not going to be quite as accurate as other forms of gambling, such as sports gambling where there's much more historic precedent to base the odds on.  Plus, it seems like a good way to get an idea of what sort of people are in the upper echelons of the Catholic Church.  I'm not sure if such knowledge provides any practical benefit, but it couldn't hurt to know it. 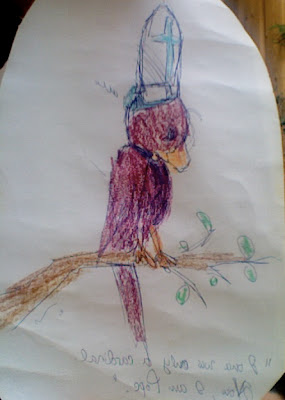 Thinking about this lead me to a rather brilliant and novel novel idea.  The plot would involve a scandal where the mob rigs the papal election in order to cash in on gambling.  Boom.  It seems like a safe bet that today's public would go mad over that plot.  Aspiring writers, you're welcome.

I've included some artwork courtesy of Calvin French.  The text at the bottom reads, "I once was only a cardinal.  Now I am Pope."  Crayon is an underutilized medium among artists, I feel.

I should also mention that the new pope has been announced, formal cardinal Jorge Mario Bergoglio from Argentina.  I applaud the liberality of the cardinals in being so bold as to choose not just a non-Italian but a non-European pope.  Glad I didn't vote on this election.  I suspect I would be out some money.
Posted by wychykibwp at 1:51 PM

I really enjoy the crayon rendition of the cardinal turned pope. The crayon medium has been very neglected amoung artists above the age of 9 years old through out history. Thank you for such inspiration!

I wanted to make your day Ed. So I posted something... ;)

wychykibwp
Hi. I'm Ed. Maybe if I spend a bunch of time writing a great profile description about myself I'll be motivated to write more because if I never post, nobody will ever come to my blog to read this. Probably it's all a waste of time anyway. I think both of my readers know me already. When you leave comments on my blog it makes my week.